We propose Wednesday, July 11 at 2:00 pm an animation by a seminar AWA – OCEAN University Initiative of 30 minutes which will allow us to have the presentation of the LMI Eclaires2 by its director Juliette Mignot (IRD, UMR Locean, Paris VI) which will be followed by a presentation of thesis work, on the “Characterization of the Senegal-Mauritanian upwelling in CMIP5 models and its future under the effect of climate change”. 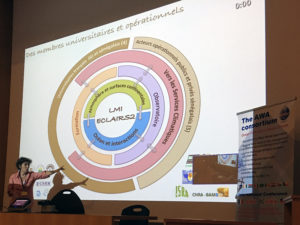 -led AWA project (BMBF-IRD) was the establishment of an International Joint Laboratory (IJL) in Senegal. As part of this OCEAN-univ seminar, Juliette MIGNOT will first introduce us to the International Joint Laboratory ECLAIRS2. This Franco-Senegalese partnership funded by the IRD aims to consolidate the scientific excellence produced in Senegal on the theme of climate, the articulation of proposed university training courses, and the coordination of initiatives developed by the various partner agencies to develop a service to anticipate and combat climate change. From a scientific point of view, the aim is to better understand the mechanisms underlying the two key phenomena of the Senegalese climate and environment, the West African monsoon and coastal upwelling. This research is aimed at understanding and anticipating the effects of climate change in Senegal, in close collaboration with local agencies and operational structures, in order to contribute to the establishment and consolidation of climate services. LMI ECLAIRS-2 is therefore at the heart of IRD’s actions to achieve Sustainable Development objectives (SDOs), linked to climate impacts on the one hand and marine and coastal ecosystems on the other. In addition, the partnership set up in the LMI proposes a reflection on the articulation of doctoral training offered on Senegalese soil, as well as an observation strategy in line with the scientific objectives defined above.

Presentation by Adama SYLLA: Characterization of Senegalese-Mauritanian upwelling in CMIP5 models and its future under the impact of climate change. 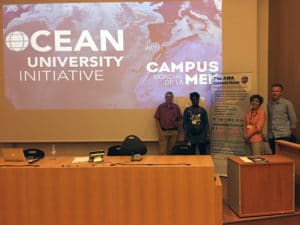 Summary: Several studies have shown the sensitivity of coastal upwelling systems to the increase in greenhouse gases. They generally suggest that these systems should be intensified during the summer season. However, recent observations do not show strong evidence of this increase. In addition, the Senegalese-Mauritanian upwelling system (SMUS), which occurs in winter, is largely excluded from these studies. This is the subject of our study, using the climate models in the CMIP5 database. The SMUS is first of all characterized by indices based on surface temperature and wind tension, highlighting the models’ ability to reproduce the system, as well as their biases. The evolution of these indices in the RCP8.5 warming scenarios is then detailed. Climate models suggest a decrease in the intensity of SMUS, mainly due to a decrease in wind at the end of the 21st century (2080-2100). This reduction in wind intensity is partly due to a shift towards the north of the Azores High.