You are here: Home / News / Seminar on Fisheries Management in West Africa 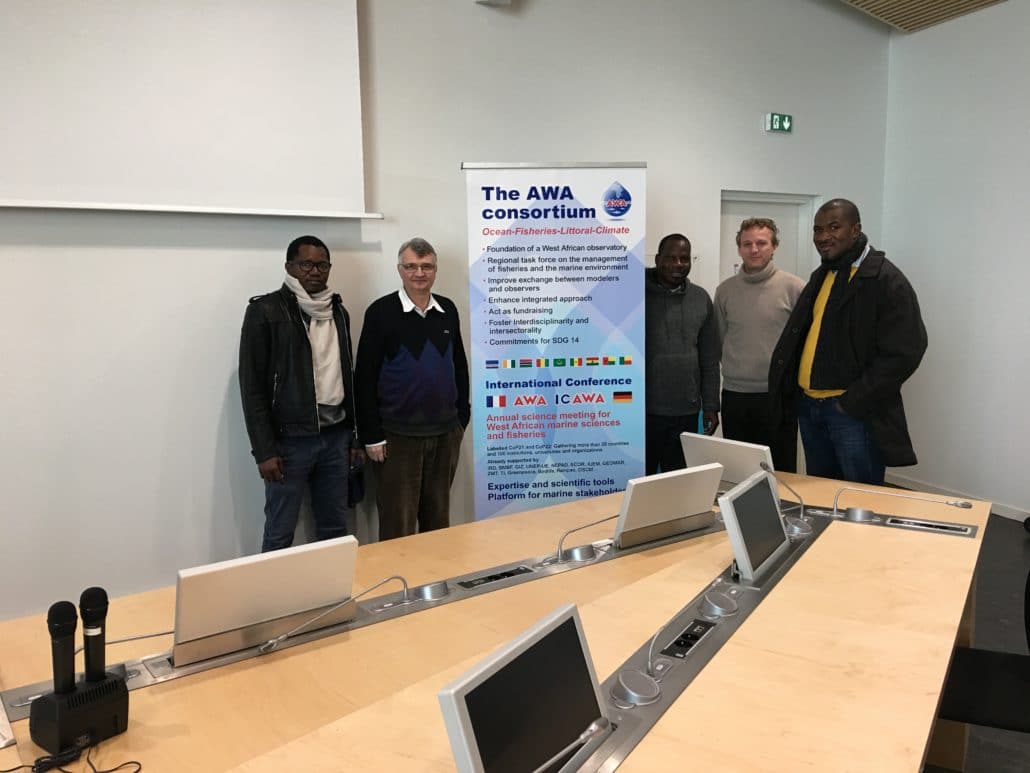 “The AWA consortium: an ecosystem approach to fisheries and marine environmental management in West African waters”

The Sub-Regional Fisheries Commission (SRFC), as part of the AWA project, funded by the Institut de Recherche pour le Développement (IRD-France) and the Federal Ministry of Education and Research (BMBF-Germany), supports its Member States and associated countries through concrete actions and consultative capacity building on new approaches to fisheries management. The main objective of the AWA project is to enable SRFC Member States to establish sustainable fisheries and marine environmental management systems based on biological, ecological, fisheries, physical, economic and social aspects. The specific objectives of the AWA project are as follows: (i) Strengthen fisheries management mechanisms in SRFC Member States and associated countries; (ii) Improve knowledge on the effects of climate change on living marine resources with regard to the functioning of their habitats; (iii) Strengthen and train students, including researchers from West African institutions and universities, to spread AWA in the region; (iv) Lay the foundations for the establishment of a future marine environment and fisheries observatory. In order to achieve these objectives, the SRFC signed an agreement with the IRD to carry out the project, which began in January 2013. The main flagship activities, apart from a strong high-level scientific production, were the annual scientific campaigns and international scientific conferences. These scientific campaigns have made it possible to acquire many parameters that were never acquired for others, updated by the presence of scientific research vessels such as Antea (France, IRD), Suroit (France, Ifremer), Thalassa (France, Ifremer), Méteor or Mérian (Germany, Geomar/ZMT), Itaf Deme (Senegal, CRODT), Amrigue (Mauritania, IMROP), Diassanga (Senegal-France, IRD) and Hermès (Senegal, private) in the waters of the countries covered by the project, as well as numerous pirogue missions. At the same time, a modelling effort, particularly physical, ecological, biogeochemical and economic modelling, was carried out to provide tools to assist in the management of West African systems, through simulation leading to different types of scenarios. The AWA consortium has succeeded in bringing out ambitious research projects, in particular the European project of the Directorate General for the Environment, PREFACE, within the framework of FP7, addressing the issue of climate change and thus studying this important issue for the sub-region. Workshops and summer schools were organized at the sub-regional level. As for the annual international scientific conferences (participation: >25 countries and >150 institutions or organizations) called ICAWA, they facilitated the participation, meeting and exchange of hundreds of researchers and development actors from the North and the South, exceeding the project’s expectations and thus creating a multidisciplinary forum for exchange of excellence for the sub-region that is unequalled in other respects. These conferences involved about ten financial partners and were widely reported in the press (e.g. participation of ministers and ambassadors). The project has made it possible to build sub-regional expert groups to study issues such as overfishing and climate change, but also marine pollution, marine protected areas, aquaculture and coastal erosion. Finally, the objective of laying a solid foundation for the establishment of a sub-regional observatory has been achieved and should be the subject of a second phase of the permanent project, thus operationalizing the achievements of the AWA project for the benefit of West African countries.

The overexploitation of many fish stocks at the scale of the Canary Current marine ecosystem combined with rapid climate change has gradually highlighted the limitations of current fisheries management plans in West Africa. In Mauritania, the approach of the National Responsible Management Strategy for the sustainable development of fisheries and the maritime economy 2015-2019 recommends the Total Allowable Catches (TAC) mechanism and its distribution into individual and/or global quotas. This reform of national fisheries policy is a new resilience to reverse the trend. However, the effectiveness of such regulation is nowadays discussed in the fisheries agreements between Mauritania and the European Union. Game theory seems to be an appropriate tool in the allocation of a TAC between Mauritania and the European Union. Using Levhari and Mirman’s logarithmic model “Fish war game” we have added a redistribution term for the rent corresponding to the fishing right paid to Mauritania (RIM) by the EU. The para-improvement process is used by the Mauritanian mediator to reproduce the dilemma of exploiting renewable resources in common ownership in order to reach a global quota agreement in the sense of Pareto-optimal. The results of procedures for determining optimal fishing quotas per country are discussed at the Nash equilibrium and then compared to the cooperative equilibrium for sustainable fishing. These two scenarios are characterised by strategic interactions relating not only to the influence of the overall supply of TACs on the market, but also to the cost of externalities due to the dependence on EU financial compensation and the levels of available biomass, the evolution of which is governed by biological laws.

“Economic profitability of small-scale artisanal pelagic fisheries in West Africa: retrospective analysis of the exploitation of the sardinella fishery in Senegal”

Small pelagic fish are the main fish resource in North West Africa in terms of quantity. In Senegal, these are mainly sardinella (Sardinella aurita and S. maderensis) and bonga shad (Ethmalosa fimbriata). This fishery is of great importance both to the Senegalese economy and to food security in the region. However, in recent years, operating conditions in this fishery have changed and recent observations have shown significant declines in profitability. The monitoring of the operating accounts of these fishing units over a period of twenty years (1993-2013) showed a loss of profit of 65% to 100%, while operating costs increased by 25% and 90%, respectively, for encircling gillnet fishing units and purse seine fishing units. This situation could be explained by several factors, but the decrease in fish biomass and the increase in fishing effort are the most important factors in addition to an increase in fuel prices.